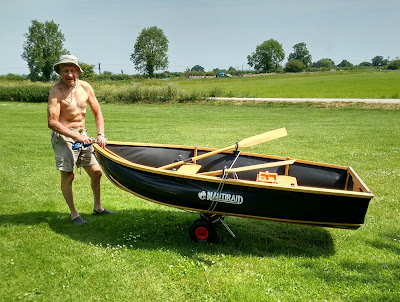 Why does a man in his 80th year want to row / drag / portage or otherwise lug a coracle some 1300 kms, through, over or around just under 200 locks and sleep for perhaps three months in a tiny flip top VW camper? Why also would Sara, my wife take on the possibly more testing task of providing back up and support by van or bike, through some of the more remote regions of Central France, ably assisted by Sally, our 10 months old Malshi puppy.


Put simply it is because we can. As we get older bits drop off such as a dead left leg for me following a skiing accident nine years ago, or Sara's brush with cancer six years ago, but with a proper diet and plenty of exercise, age really does not become a problem and we continue to walk, bike and ski as before.


Having rowed all my life in many craft from whalers to light weight racing shells and then 25 years of working life in the Thames River Police, I gained a wide range of marine experience. I was fortunate enough to be able to retire at an early age. To celebrate my 50th birthday my wife and I sold up everything in 1988 to sail around the world. For my 60th birthday we started long distance cycling, commencing with a 4500 mile unsupported camping tour across the USA from Seattle to Orlando, Florida. Then on my 70th a similar distance was cycled through several European countries.


2018 sees the start of my 80th year. The 80th birthday itself will be spent in the French Alps skiing, however as a first challenge, the idea of being the first recorded non commercial person to row this route and perhaps enter the record books appealed. Hence, we spent the past 18 months researching the route, mainly on bikes, and gaining the several necessary permissions from various French Authorities.


Choosing a boat also provided a challenge. It needs to be able to face everything from wide sea estuaries with big ships down to narrow canal waterways. It needs to be light enough to portage and drag up steep river banks, but sturdy enough to face the rigours of weather from the top to bottom of France. Above all it must be easily and comfortably rowed. Some problem! Finally, I decided on a coracle. Not an egg shaped thing with a paddle that always seems to be everyone's idea of a coracle. Coracles around the world come in many shapes and are simply a skin stretched across wooden strakes, and are usually collapsible.


This one is made by Nautiraid ( https://www.nautiraid.com/en/coracles.html ) a French company that hand builds folding craft at their factory near Le Mans. It is dinghy shaped and rowed with oars. After testing one on Lac du Bourget at Aix les Bains, and above all after hearing that the elite British military use these and Nautiraid's sea going kayaks, I was convinced it would suit my challenge.


At 2.5metres and weighing just 32 kgs (plus equipment) it is made of hypalon (an almost indestructible material) stretched over ash stringers. The timber is grown in the mountains of Savoie where the trees grow slowly and straight for greater strengh. Inflatable panels down each side provide positive buoyancy and it is floor boarded throughout. I have made several modifications to fit my purpose and have converted a kayak trolley to permit any longer portages, and last year I performed trials on the Kennet and Avon, Grand Union and Bridgewater Taunton Canals in the UK.


Finally the time has come to blister hands and bum and pray for not too much more rain to fall in Northern France, so that when Oggi (named after Oglers, the rowing policemen of yesteryear) is launched into the River Somme on 15th June when we will be hoping the flow of the river is not too strong to row against to start the long pull to the Med.